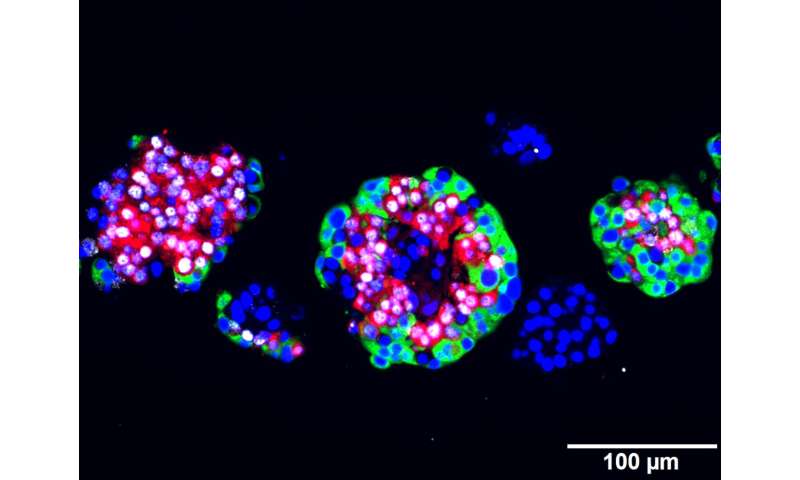 It promises to be a simple and elegant strategy to heal diabetes type 1: Replacing the destroyed beta-cells in the bodies of patients with newly-produced insulin-secreting cells. For years, researchers around the globe tried various approaches with stem- or adult cells in order to induce this transformation. Their effort lead to a fundamental understanding of the molecular mechanisms involved in the development of beta cells – however, a compound capable of doing the trick was missing.

Then a team coordinated by Stefan Kubicek, Group Leader at CeMM, eventually got a lead: In their latest study, published in Cell, they showed that artemisinins hit the bulls eye. With a specially designed, fully automated assay, they tested the effects of a representative library of approved drugs on cultured alpha cells and found the malaria drug to do the required job. “With our study, we could show that artemisinins change the epigenetic program of glucagon-producing alpha cells and induce profound alterations of their biochemical function”, Stefan Kubicek explains.

Alpha- and beta cells form together with at least three other highly specialized cell types the so-called islets of Langerhans in the pancreas, the body’s control centers for the regulation of blood sugar. Insulin, the hormone produced by beta cells, signals to reduce blood glucose, while glucagon from alpha cells has the opposite effect. But those cells are flexible: Previous studies showed that alpha cells can replenish insulin producing cells following extreme beta cell loss. The epigenetic master regulator Arx was identified as the key molecular player in the transformation process.

“Arx regulates many genes that are crucial for the functionality of an alpha cell,” says Stefan Kubicek. “Preceding work of our collaborator, Patrick Collombat’s team showed that a genetic knock out of Arx leads to a transformation of alpha cells into beta cells.” This effect, however, was only observed in live model organisms – it was completely unknown if additional factors from the surrounding cells or even distant organs play a role. To exclude those factors, Kubicek’s team together with the group of Jacob HecksherSorensen at Novo Nordisk designed special alpha and beta cell lines to analyze them isolated from their environment. They proved that loss of Arx is sufficient to confer alpha cell identity and does not depend on the body’s influence.

With those cell lines, the researchers at CeMM where now able to test their compound library and found artemisinins to have the same effect as an Arx loss. In close collaboration with research groups at CeMM lead by Christoph Bock and Giulio Superti-Furga as well as the group of Tibor Harkany at the Medical University of Vienna they managed to elucidate the molecular mode of action by which artemisinins reshape alpha cells: The compound binds to a protein called gephyrin, that activates GABA receptors, central switches of the cellular signaling. Subsequently, the change of countless biochemical reactions lead to the production of insulin. Another study by Patrick Collombat, published in the same issue of Cell, shows that in mouse models injections of GABA also lead to the transformation of alpha into beta cells, suggesting that both substances target the same mechanism.

In addition to the cell line experiments, the effect of the malaria drug was also shown in model organisms: Stefan Kubicek´s team and their collaborators (Martin Distel, CCRI Wien; Dirk Meyer, Leopold-Franzens-Universität Innsbruck; Patrick Collombat, INSERM Nice; Physiogenex, Labege) observed an increased beta cell mass and improved blood sugar homeostasis in diabetic zebrafish, mice and rats upon artemisinin delivery. As the molecular targets for artemisinins in fish, rodents and humans are very similar, chances are high that the effect on alpha cells will also occur in humans. “Obviously, the long term effect of artemisinins needs to be tested,” says Stefan Kubicek. “Especially the regenerative capacity of human alpha cells is yet unknown. Furthermore, the new beta cells must be protected from the immune system. But we are confident that the discovery of artemisinins and their mode of action can form the foundation for a completely new therapy of type 1 diabetes.”